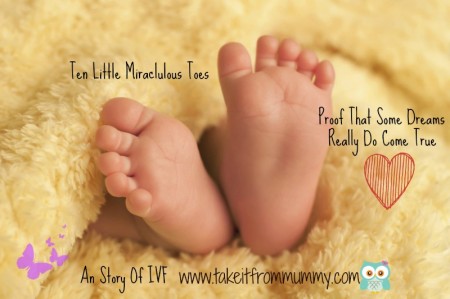 When my days were dark, and I thought it would never happen for me, I used to trawl the internet for IVF success stories, searching for a glimmer of hope.

How it all began; For as long as I can remember I wanted to be a mummy, while my friends played with barbies and roller skates, I dutifully took care of my baby dolls, taking them for walks in my most loved dolls pram.  I dreamed of the moment, I would meet my baby, what s/he would look like, be like, smell like.

After getting married my husband and I tried to get pregnant for 2 years.  When I say tried, I mean tried… you name it, we did it, I would have stood on my head eating ants if someone had told me it would improve my chances.  But not once did we get even a hint of a positive, and each month my heart broke a bit more with the on time *never late arrival of my period.  So we went for some primary fertility investigations, which included a HSG (dye through your tubes to check for blockages).  The phone call with the results was one of the worst moments of my life; the Dr calmly reported that I had ‘bilateral hydrosalpinx (meaning both tubes were blocked with fluid, probably toxic), and we had no chance of natural conception’. The recommended course of action was IVF, preceded by an operation to remove both my fallopian tubes.  How I cried, and sobbed and mourned. We would never have that ‘missed period’ moment, never have the ‘natural conception’ I had dreamed of.  Our dream of pregnancy was now to be tightly controlled, medically managed, and far from guaranteed.

We took some time out (when naively month after month I prayed, hoped, begged for a natural miracle), before deciding on a second opinion. Our second doctor ran some tests, reviewed the results of the HSG, and said that despite the HSG results he would be prepared for us to try an IVF cycle without tubal removal.

Our first cycle was May 2009, it is pretty gruelling, lots of drugs, lots of injections, lots of scans, and hormones that are all over the place. However, we did okay and had a good crop of embryos.  We had 2 implanted, and another two were deemed good enough to freeze.  I literally did everything possible, my body was the veritable temple.  Yet, 10 days later the news came back that we were not pregnant. Devastated. A new low.  Should I now accept I was never going to be a mother?

A few months later, wounded but not out, we decided to try again with our 2 frozen embryos.  I found the frozen cycle far less intrusive overall, less drugs, and less injections. However, I did a sneaky early test the night before the blood test to psychologically prepare myself.  The test flashed NOT PREGNANT back at me, and I stood there in the bathroom at 5am and began to accept that this really was it. We were out of ideas. We were not going to have our longed for baby.

I called the clinic, and explained there was little point in coming in as the test was negative, but they asked me to come in nonetheless.  I numbly sat there while the nurse drew blood.  Then when the phone rang and the receptionist asked for me in a quiet voice, I said “it’s okay, I know it hasn’t worked”, to which she replied “but, it has”.  And, it had. It seems I had just tested too early. 9 months later on her due date I gave birth to a May Miracle.  From the moment I held her, my life changed, I thought my heart would burst.  She was/is the absolute love of my life, my dream come true, and the life in my veins, and I thank the universe every day for bringing her to us.

For what it’s worth we were/are never going to be one of those ‘it’s happened via IVF, so now you will fall pregnant naturally types.

So 2 years later, we decide to take a deep breath and dare to give IVF another go.  It was a similar scenario to the first time, we had an unsuccessful fresh cycle, which resulted in an emotionally devastating negative test.  But we luckily had another 2 frozen embryos from this cycle, and they were to be our last throw of the dice.  We were emotionally, physically, financially exhausted.  If this didn’t work, then we would move forward as a blessed family of 3.

But this time I knew.  No obvious symptoms, just a sense of calm, so I decided to I test 3 days early, and whilst I still prayed, and hoped, and shut my eyes, I knew that when I opened them there would be another pink line looking back at me. And there was. That line is sleeping upstairs. The next love of my life. The completion of our family.

So there you have it, defunct tubes still in place. 2 fresh IVF cycles unsuccessful, and 2 frozen ones mercifully successful.

If you have just had the news, the diagnosis, been told that IVF is the only option.  I have been you. I have been overwhelmed by sadness, despair, uncertainty.

But it can and does work. I promise. And when and hopefully it will work for you, please share your story to help the next person have that glimmer of hope.

I will just sign off with this quote from a book that really touched me when I was trying so desperately to conceive.  I know every parent loves their child with all their heart, but I thought this was such a lovely empathic way of expressing the pain of infertility;

I don’t know why we have been chosen to undertake such a painful journey, why we must go through such struggles to bring our children into the world.  But I do know that when we look into our babies faces, they will never have to wonder if they were really wanted.  Ours are the children who, no matter how they came to us, will look at their parents and “know” from the deepest place in their heart, how much we cherish them and we laboured to give them life.  And in that there is no greater security and no greater gift.