Yes it should matter, think of the positives. 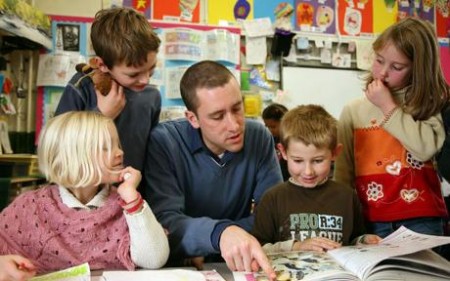 Recently a discussion was raised in our Facebook support group Mum Knows Best Warwickshire regarding men in childcare, specifically nurseries with small children. Many Mums were readily in support of male childcare workers. However, it has become apparent that there are still a minority of people who do hold the view that males shouldn’t work within the sector and that they might even take steps to remove their child or not choose a nursery if they had a male member of staff.

So why is it that in 2014, in the era of equality that some people still feel this way?

Is it that some parents may have lack of understanding and pre-existing misconceptions of men in such roles. Or is it that some have exsisting negative feelings towards men because of their own life experiences?

The question remains, could it really be that men would only want to work with children for some sinister reason. That all men must be cautiously watched over in case of abuse?

The notion seems utterly unbelievable to me, however, I am speaking from a childcare background where I have worked with male practitioners in settings and seen the huge benefits. Not only to children who have first hand experience of a ‘real’ workforce, but also to parents, whose views may have now been changed for the positive because they have seen first hand the bonds that children can build with both male and female carers.

What other profession can I think of where men could face discrimination for being part of the team? None really, certainly none that men might have to come up against such dreadful negativity before they’ve even begun.

The fact is this there are sufficient procedures in place in all OFSTED registered settings for all nursery staff, (whether male or female) to protect both the children and adults in the nursery. This includes safeguarding policies and usually purposeful rooms and changing areas where doors have see-through panels that all ensure that both the children, and the staff are protected from either allegations or abuse.

Yes there have been instances of abuse of this trust in the news, however, many of these terrible acts have been committed by women. What do we, and the newspapers focus on though? Of course it’s the men. Never mind the hundreds of other professions where people/men have been convicted. I don’t have the statistics but I would be willing to bet that the percentages are very small.

If it were a male teaching 2 and three year olds football though, would anyone bat an eyelid? Of course not, that fits a gender specific purpose so we’re all happy with that.  A primary school teacher? Fine. There’s no difference though. Except perception.

I am trying to think objectively about this, would I have felt the same had I not the knowledge and experience I have? I suppose I will never know.

To anyone who might be wondering the same. How do I feel about this? Perhaps you’ve been googling and would like another person’s opinion or even some stats. Here’s some info for you.

If you are struggling with a decision and want to hear some of the many reasons why it’s important that nurseries employ male practitioners. Here are some of the positive views on the subject.

55% Research carried out back in 2009 revealed that 55 per cent of parents with nursery-aged children wanted them to have access to a male childcare worker, with 66 per cent of single parent women saying that their children would benefit from having a man involved in their care and development.

The Pre-school Learning Alliance MPG survey asked parents and men and women working in childcare what benefits more men working in childcare and early education could bring, and received the following responses:
• More men would end the stereotype of childcare being seen as ‘women’s work’.
• Having more men involved in early years childcare would increase the status of the work (and possibly salaries as well), as childcare is traditionally seen as a low-pay, low-status sector.
• The presence of more men in early years settings would make it easier for fathers and other men to feel more at home there and be more involved with their children’s childcare.
• Men would bring ‘added value’ to pre-schools and day nurseries, including a different perspective, different ways of working and being with children, such as ‘rough and tumble’ play with boys.
• The importance of male role models to young children, both boys and girls, particularly for those children growing up in families with little or no contact with males.
• A number of co-parenting parents and single parents spoke of the value their children (often sons) had from them having a male early years or primary school teacher. 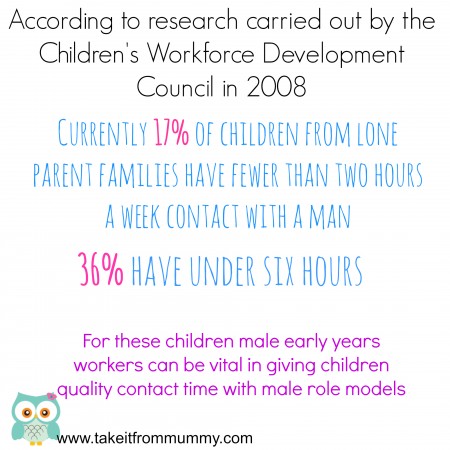 On the 8th July 2014 The Fatherhood Institute proposed a paper which is in response to a government enquiry into careers guidance for young people. Their response makes interesting reading.

In a nutshell, male youngsters might consider a career in caring for children but somewhere along the way, their enthusiasm for such a career dwindles. This is possibly due to  external factors such as worries of false accusations and parental negativity.

I was pleased to discover that The Co-Operative childcare is running an initiative to recruit more men following the discovery that only 2% of their workforce were male.

Gemma Allardyce, head of customer and brand at the Co-operative Childcare, said,

‘Men enhance children’s experiences, are positive role models and bring new ways of learning. However, gender stereotypes in childcare are holding some men back from what could be the perfect career path for them in which they can help to positively influence our next generation of children. ’

At Co-operative Childcare we are determined to make a marked difference to the male: female ratio in our nurseries. To do this we need to challenge preconceptions that are damaging the industry and champion that “real men” really do work in childcare.’

What more can I say?

I hope that this intiative is successful in inspiring more men to go for it! It is well known that a childcare career isn’t the most rewarding in terms of monetary value. However, the personal rewards, such as knowing that you have built up a trusting relationship and positively influenced that child’s future in terms of their experiences and confidence is one that you really cannot put a price on.

I am sure that there will be a shift of opinion in the future and I truly hope that male nursery workers will be celebrated openly. This will only happen though if nurseries actively seek out a diverse workforce and that the sector becomes more readily available to men at education age.

The discussion on our facebook page has proven very positive with 59 responses, every single one of them from Mum’s in favour of more male nursery workers. I shall leave you with a selection of these comments from the future of the children today! Change is a-foot people! Your views are welcomed in the comments section. 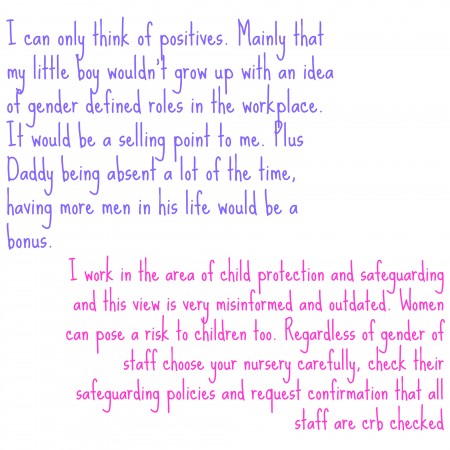 “I think you should try and interact with them and trust your instinct, as much as nurseries I visited I didn’t like some of the females working there, it massively depends on the individual rather than their sex”.

“Would make no difference in the slightest! To be honest I wish more men went for jobs with nurserys! More male role models for little ones and hopefully one day the male/female job role divide will be gone completely and people wouldn’t think twice about it all.. The room leader in my daughters room is a man and he’s great, very creative and fun”.

“My lb (2) has a man at his nursery and he thinks he is great. I love the fact that it’s not all women” xx

“I think male staff would be a real selling point for me and a great role model, unfortunately in nursery and then primary education there are hardly any male staff and I wish there were more. My older sons school has one male TA and that’s all – but he is everyone’s favourite”!

“Kids love men in schools/nurserys as it’s not he norm. Remember he’s done the same qualification as everyone else and he’s a professional”.

“Yes! I wish there were more men at my kids nurseries, so they can see positive male role models from a young age as well as female ones. Just because they are a man doesn’t make them any less able to do the job or any more dangerous to children” x

“I know male childminders and they are brilliant at their job! and have had long trusting careers from it. I understand if women have had less male role models of their own or bad experiences with opposite sex then I can see why they would struggle with this topic, after all our children are the most precious people in our worlds and we are only human. Fear sometimes comes with no reguard for us or reason so please don’t judge this lady for asking. Reassurance is good and we only need to watch the news to see where the stigma comes from. But school are extremely governed to maintain highly qualified staff and they must be CRB checked. Previous nightmare cases in the press have ruined the reputation for a huge majority. I think these horrors are very rare. The PE teacher at my Sons school and for toddler group is Male and the kids love him”.

Elf On The Shelf, A Christmas Tradition
What’s On In Warwickshire Christmas 2014