Our beautiful baby boy, Theo was born on 26th August 2011 weighing a healthy7lb 5&1/2oz’s. My whole labour and birth had been very non-eventful and straight forward, which was wonderful especially as it was my first time.
Throughout the next few months Theo was perfect and developing normally with just the odd cold like any other baby. He was hitting all the targets for his age, like smiling, babbling and almost sitting by himself at 5 months old. At this point I had also started weaning him which he took to brilliantly. My husband and I both felt so lucky to have it as easy as we did, after hearing so many not so good experiences from other parents we knew. This is probably why what happened next hit us so hard, because it came like a lightning bolt out of nowhere.

At about 5 months old, one day Theo was playing happily when he began to outstretch his arms and jerk his whole body. It would happen for a few seconds at a time and would repeat in clusters ranging from 2-8 minutes long. At first I thought nothing of it as he then carried on playing, but it became more frequent over the following few days, and my husband was extremely concerned. 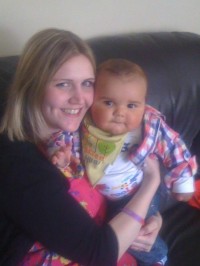 Our first port of call was the local GP to which we took him together and explained the body jerks we were seeing. He simply told us that Theo was just constipated so not to worry. So I went away feeling a little relieved having put total faith in my GP, but my husband was less convinced by the diagnosis.
Theo continued to have clusters of spasms, which is when my husband began to Google the symptoms. He found some videos of the same thing in other babies and was then convinced Theo had infantile spasms, which is a form of epilepsy. I on the other hand was in complete denial as there was no epilepsy in the family, but still terrified he might be right.

So our next port of call was to go to A&E. We explained Theo’s seizures the best we could, but they just didn’t look like a typical fit that you would expect to see when you hear the word fit. It was so hard to explain without someone actually witnessing it themselves. The nurse checked him over and told us not to worry because he just had a touch of colic. So again we went away hoping she was right, and brought him so infacol straight away but it made no difference. I was starting to realise something had to be seriously wrong as he was now having up to 8 seizures per day and they were lasting longer than before.

We decided that we must film the seizures so that we could show the doctors. I then went back to A&E and refused to move until he was properly checked over. It felt like they thought I was just a paranoid first time mum. So Theo was admitted and once on the children’s ward I showed at least 5 different doctors the video and one nurse witnessed a seizure first hand. So eventually that same day we were taken by ambulance to Walsgrave for an emergency EEG. The results were sent straight over and within about half an hour our worse fear was realised. Theo was diagnosed with infantile spasms. My husband had been right all along and that’s when I too had to accept it. It was a huge relief to know that we weren’t going crazy after all. Our lovely consultant said that it was so hard for the doctors to diagnose because it’s so rare, so is often miss-diagnosed, and she had only seen one other case before.

Theo was immediately started on a course of steroids which I administered every 6 hours for 6 long weeks. Our baby ballooned in weight and was extremely irritable for the whole time. His immune system was so low that we couldnt even take him outside. It was the hardest time but we both have very supportive families and this happening just made us stronger and closer. Thank goodness for family! 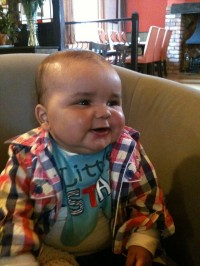 We were very lucky that the steroid treatment worked almost straight away, and at the end of treatment his EEG had cleared up. An MRI scan showed no indication of why this happened to him though. Our consultant said he was just unlucky. We were told that long term not to expect too much from him developmentally as most children with infantile spasms have learning difficulties. However, 2 years on and he has proved them all wrong and was even discharged early because he is hitting all of his targets spot on.

We are now aware of the many different types of seizures and think it’s important for people to know that it doesn’t just have to look like a convulsion to be a seizure. I always have a watchful eye out over him in case of a relapse but so far he is doing amazingly well. With infantile spasms he is likely to grow out of this but may develop an adult form of epilepsy. However we will cross that bridge if we come to it.
It is so true that you should always trust your instincts weather you’re a mum or a dad. We knew that something wasn’t right and it’s a good thing that we persevered and made someone take notice before it was too late.

We support the charity epilepsy action as they raise awareness for infantile spasms amongst all other forms of epilepsy. The link below is to a page on their site in which you can read about Theo’s condition, and also learn about the different types of seizures that can occur in anyone.
https://www.epilepsy.org.uk/info/syndromes/west-syndrome-infantile-spasms

Take It From Mummy would like to thank Tracey & Theo for sharing their story to raise awareness of Epilepsy & Infantile Spasms in children. We are so, so pleased that Theo is doing well & hope that this story will not only educate other parents but also show that there is hope and support out there xx