SIBLINGS AT THE SAME SCHOOL? 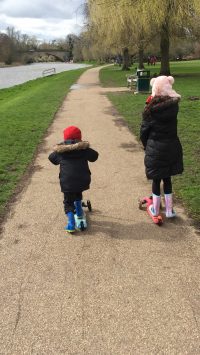 Earlier today I was driving along with my little man in the back of the car when he piped up, as they invariably do,  “Mummy, when I go to Olivia’s school I’ll be able to play on the field with her”. I feel a familiar butterfly in the pit of my stomach. I’m going to have to reply to him again, as I have so many times before now on our journey to collect her from school about this subject and I know where the conversation is headed.

Isaac is four and will be going to school in September, he’s been to Olivia’s school every single day since he was a tiny baby, he’s familiar with the sights, the sounds, the teachers, parents and everything about her school is comfortable to him. Just like most Mums, I worry about my baby flying the nest and starting the big world of school, will he cope without me, will he be too tired, will he make friends, will he cry on the first day? Will I miss him too much. But aside from all of this, I have some added stress. A stress and worry I’ve had on my shoulders for the last four years since Olivia started there.

Rewind four years ago to 2013. I had applied for six close schools, all so close in fact that they were all within just a few miles of our home. The nearest being 0.21 & 0.23 of a mile from our home. So close in fact I can hear the children playing in the playground. My third choice was just 1.7 miles away. We weren’t offered any of our six preferred schools despite them all being so close and had a summer of anguish worrying about what to do. Should we choose one we had been offered which didn’t provide any out of school clubs which we need as we both work Mon- Fri, or choose another which is completely in the opposite direction from our work and home and a longer journey every day in the car?

I had attended three appeals, each with a five month old baby in tow, each which basically consisted of me crying in front of a panel of un-sympathetic people from various admissions places and predictably culminating in a ‘no’. I had been warned before-hand that my efforts would be wasted, that I must have a really good reason for wanting a school to take their class over the 30 limit, but I just had to try for my daughter’s sake.

After accepting that she would have to attend the school further away simply because they were the only one with space, we began the process of settling Olivia into the idea of going to a school she hadn’t seen before with children she wouldn’t be familiar with, I know that this is the case for lots of children, and I also know she would have been fine and it was a good school, but I had perhaps quite naively thought that she would be able to go with some of the children from her pre-school and this to me and her at the time was so important. At the very last minute, after school uniforms had been brought and teachers met we had a call from admissions. One of our top three schools had a space! Would we like it? YES WE WOULD! I felt like I had won the lottery that day, I was absolutely delighted. I remember pulling over from driving to take the call and crying for most of the rest of the day! I had tried so hard to be positive about our other option but I knew in my heart it would have been a harder slog for us all.

From that day in September 2013 I have felt so lucky that we had a happy ending BUT I have also always known that there is the possibility I will have to face this fight once again and this time there’s even more at stake. We don’t live in the catchment for Olivia’s school and are 1.7 miles away. (To this day it still annoys me that I can’t walk her to and from school when I can see so many people take their children past our front window to a school just across the road). It makes no sense to me. There are many, many people ahead of us on the potential list for Olivia’s school this September. It’s only a small one form entry school, which to add to the mix has just had some 150 new homes built behind it!

SO many people have said to me, “but you have a sibling, you’ll be fine”, but it doesn’t work like that.

1. Children in the care of, or provided with accommodation by, a local authority and children who were looked after, but ceased to be so because they were adopted (or became subject to a child arrangements order or special guardianship order);

2. Children living in the priority area who will have a sibling at the school at the time of admission;

3. Children living in the priority area who will have a sibling at the partner junior school at the time of admission;

4. Other children living in the priority area;

5. Children living outside the priority area who will have a sibling at the school at the time of admission;

6. Children living outside the priority area who will have a sibling at the partner junior school at the time of admission;

7. Other children living outside the priority area.

As you can see, we are WAY down the priority list, we come in at number five. Fabulous.

So these are the things that go through my mind at 3am when I wake up and sometimes think about the next few months:

links: This facebook group helped me so much four years ago, they petitioned for siblings to be a higher priority in our area.

I know i’m not the only one who is going to be going through this again this year, and as April looms and i await the decision which is completely and utterly out of my hands I can only cross my fingers and hope for the best.

Here’s the conversation I had with Isaac today:

Isaac:“Mummy, when I go to Olivia’s school I’ll be able to play on the field with her”

Me:“I’ve told you before Isaac, we have to wait and see if you can go to Olivia’s school”

Isaac:“Who will tell you anyway? If I’ve been a really good boy and I get up when the sun gets up then they will say i’ve been good enough to play with Olivia at her school?”

Isaac:“Well that’s silly because Olivia doesn’t go to the school we live near and I’m going to be a really good boy now so I can go”

What do you say? What will I say?