You may or may not already know that my second little person was a little refluxer, he had tongue tie, reflux, eczema, basically most of the baby related things that tend to send a new Mum completely bonkers. If I had this invention from Nuby I suspect that my life would have been made sooo much easier!

We have been sent some of these revolutionary bottles to try out and our army of Mummies are on standby to give them a full road test! We will post full reviews as soon as they have been given the Mummy/Baby testing. 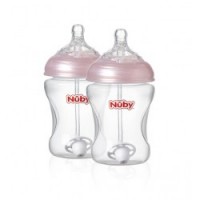 Here is some more info

Nuby are launching a new baby bottle just for babies who suffer with reflux and colic symptoms, I know what you’re thinking, there’s loads of these!! Every bottle maker has an anti colic valve/tube/magical thingymagig. Well don’t stop reading yet, this one looks different! 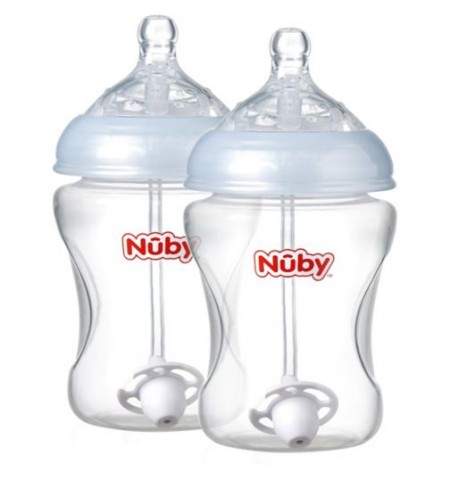 So, anyone with a baby who has reflux will tell you, the first thing you’re told is to ‘feed baby more upright’, great, thanks for that, easy at the beginning of the bottle but not so hard when you reach the bottom of the bottle and you do at some point have to “do the baby-lean and bottle-tip”, (that’s my technical term for it anyway).

The bottle is called the ‘Nuby Natural Touch 360’, it has a weighted straw which allows baby to feed in the upright position until the last drops of the feed. It has three anti-colic valves which prevent vacuum build up inside the bottle. It also has a teat which allows 360 any angle feeding – that means baby can latch on at any angle round the teat.

Ok, so I haven’t tried it.. yet! It has just been released this month and I’m looking forward to hearing what our Mums think.

OUR FIRST REVIEW IS IN!

Our Mum Jo has been road testing these bottles with a number of other Mums who have babies with reflux, here is what she says:

“I have been using these bottles for 3 weeks and think they are absolutely fab.
My little boy who is 8 weeks now was diagnosed with silent reflux at 2 weeks old and feeding was a nightmare. These bottles allow me to feed him while I hold him upright which makes his feed much more comfortable for him, making the experience much nicer for him and for me!
They stop him taking in too much air while he feeds which means he winds really quickly after. The bottles also fit in my tommee tippee steam steriliser and the microwave one no problem.
The only down side to them is that they are fiddly to wash and to put back together after, and if you put the top on the bottle when the water is too hot the milk sprays everywhere, which can be annoying and messy. However these couple of issues are outweighed by the positives that I have experienced using the bottles and I would definitely recommend them.” 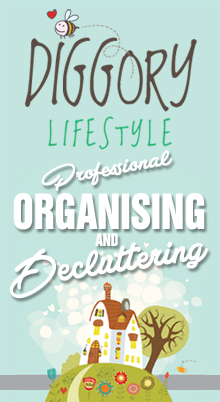