Did you think it was just you? We’re here to tell you, It’s Not! 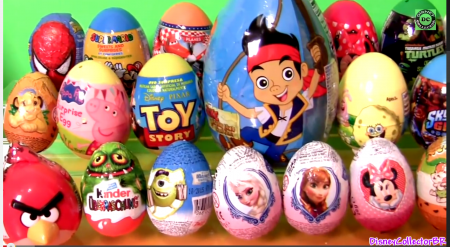 Hands up if you have left your toddler for a moment watching something like Peppa Pig on YouTube, minutes later to discover your child has clicked on a side link and is now mesmerized by a crazy voiced woman unwrapping Kinder Eggs and other toys!

This latest craze of ‘unboxing vidoes’ has taken you tube, and our little people by storm! In fact, the Disney Collector Channel – (VERY annoyingly voiced woman with funky nails who films her hands unwrapping toys) is now said to be a millionaire and her most popular video has had over 94 MILLION views! I think at least half a million of those were from our house!

These videos seem ridiculous to adults, however, the simplest idea has our toddlers entranced. Maybe it’s not so surprising, it’s no secret that children adore opening gifts. Many enjoy the unwrapping more than the actual toy at the end of it! Flashback to Christmas morning, you know what I mean! I guess from a parent’s point of view, in terms of the toy unwrapping, it’s kind of useful to see exactly what a toy looks like before you buy it…I SO wish I had watched one of these on the Snow Glow Elsa before I moved hell and high water to find it at Christmas, I would have discovered it wasn’t worth the money at all!

So there we are, want to make some quick money? Head to the cash & carry, buy a truck load of kinder eggs and film your hands opening them! Youtube pay up to $4 (£2.50 ish) per 1,000 views, if you get anywhere near Disney Collector lady you’re laughing!

If you have no idea what I’m going on about, firstly I’m jealous that you don’t have to hide your iPad, and secondly, if you value your sanity, DON’T under any circumstances show your child the videos below!