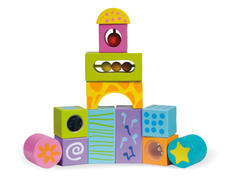 Those who have been following Take It From Mummy since we launched will already know just how much I love wooden toys! These beautiful wooden blocks have captured my attention because they are far more than just a set of building blocks!

These 12 musical Boikido blocks have inserts including a mirror, bell, rattles and beads. Shake the blocks and hear them rattle while playing.

An adorable set of wooden blocks, decorated in bright colours. These 12 musical blocks include a mirror, rattle, bell and beads. so let’s put a very active 18 month old to the test.

Tate was very excited as soon as he saw the blocks, the cute packaging really caught his eye and he could not wait to play with them. As soon as we opened them his little face lit up! He enjoyed picking each one up and shaking them to listen to the different sounds. He also liked playing with the beads inside the blocks and playing peek a boo with the mirror. Next he began to stack them on top of each other and enjoyed watching them fall over. We then played a game grouping the colours together and talking about the different patterns on the blocks, his favourite being the giraffe print painted block.

Things I would make better for a longer play are:

1. To include more blocks to be able to vary the type of tower or towers you could make.

2. Vary the sound of each block as many of them have the same sound to make it more fun.

Overall we really enjoyed playing with the blocks together and would recommend them to all yummy mummy’s.

You can buy these blocks on NUK’s website HERE and what’s more, visitors to TakeItFromMummy.com get a huge 20% off all products using the code MUMMY25 at the checkout.