Our Mum’s panel reviewer Jo was desperately in search of a toy that could help her little boy to crawl forwards. Jo found just the thing! Tiny Love’s Follow Me Fred! 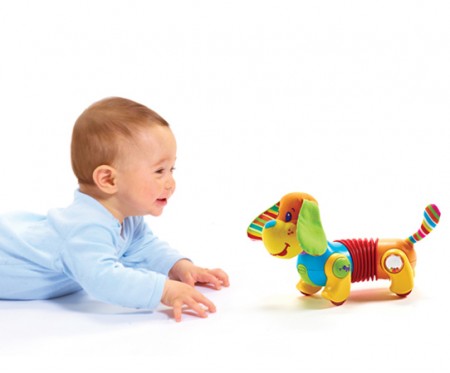 So, there we were with our first born pride and joy who was 5 months old and had just started crawling…backwards.  His face would light up when we put a toy down on the floor just out of reach in front of him, but his features would slowly descend into deep furrows of frowns as he moved in the wrong direction despite his best efforts.

Keen to save him from his wayward arms and legs that determined he would, yet again, get wedged under the edge of the sofa instead of clutching his favourite spoon/ ball/ cuddly friend we set about doing some research into toys that might encourage crawling forwards.  There were mixed reviews on some of the come back rollers and various crazy balls that disappeared off in all directions with a mere poke but a chance shopping trip introduced us to Tiny Love’s Follow Me Fred.  Thinking it was worth a try and at the very least little Fred looked sweet, we made our purchase and hastened home to observe the results.

The immediate result was much the same, poor Fred going off in one direction and our son resuming his partial ‘wedged under the sofa’ position.  However, in a matter of days Fred, or Tiny as we called him, became a firm friend.  He was ‘introduced’ to other toys and books and picked up and observed very closely by our son. After a few days had passed we tested him again.  Lo and behold as Tiny moved across the carpet, so did our son, so keen to catch up with him and play with him that he forgot all about the tempting gap under the sofa that his little legs neatly slid into.  In fact he even appeared to forget that backwards crawling was ever his style.  Tiny was so much fun that he stuck around in our playroom long after the crawling stage had passed.  He was one of the early toys introduced to our next little bundle of joy and withstood his close inspections and play too.

And Follow Me Fred isn’t just about the movement.  Whilst he does move forwards at the slightest touch (with adjustable speed might I add) he also plays a little tune, barks, has crinkly ears which have been a big hit with our boys in the early stages of crawling and playing, and has a flexible middle body so you could, if you so wished, set him to move around in circles.  He is still going strong after 3 years and is still in our playroom even though both our boys are long past their crawling days.  I would happily recommend him to anyone 🙂 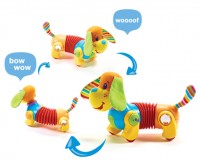 Before baby begins to crawl, place Follow Me Fred in circular mode. Alternate between clockwise and counterclockwise. Place the toy in front of your baby on the floor and touch it to trigger its movement.

The cheerful music and slow movement will attract baby’s attention and encourage him to reach forward and eventually to start crawling.