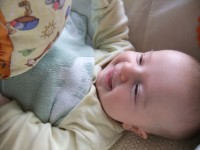 In the late summer of 2012 our second baby boy, Fraser, entered the world and our family.  After a challenging pregnancy it was a particular joy to have him in the outside world and be able to keep an eye on him, cuddle him and play with him, all those lovely newborn snuggles were especially important.

When he was just 7 weeks old, however, our world turned upside down. After a lovely day out we were relaxing at home with our boys when Fraser was accidentally knocked on his shoulder. His happy smiles froze on his face, then his lips turned blue and he started trying to cry or gasp, we couldn’t work out which. Within seconds he was lifeless, laid out on his back on the playroom floor. He was white, with blue lips. He had stopped breathing and his heart had stopped. In one flash I thought we had lost him, in the next my mind transported me to the first aid room where I had learnt the basics in baby and child first aid. “Remember it as DR ABC” the words rang in my ears and I started the process on autopilot repeating over and over to myself, “I need to stay calm”, “he won’t survive if I panic”. My husband had the emergency services on the line but couldn’t get our address out. I took the phone, put it on loud speaker and carefully told them where we were whilst also reviving our son. It seemed like ages, but was probably no more than a minute and he suddenly gasped. Then fell silent for a few seconds before gasping again and starting to breath. The colour started to return to Fraser’s face just as the emergency response vehicle and ambulance turned up. After a short exchange the ambulance whisked Fraser and me away to hospital. That journey was possibly the worst of my life. I had to be belted in for personal safety reasons and Fraser was in his car seat on another seat, so I was sitting where I couldn’t see his face. The paramedic could see him but was reporting that he was looking very pale. I just wanted to scoop him out of his car seat and cuddle him forever. The next few hours went by in a blur. There were differences of opinions as to what had happened. We were told that Fraser was at high risk of Sudden Infant Death Syndrome and given support leaflets but no offer of talking it through or words of comfort were given. We were advised to buy an apnoea mat for his crib. I was advised to breastfeed him for as long as possible and always “from source” because there could be a variety of reasons behind the episode. We were terrified.

It took a few months, but by the late spring 2013 after a couple of further incidents and with the fantastic support of our family doctor who referred us to a brilliant paediatrician, we finally had a diagnosis – our son was having Reflex Anoxic Seizures. Since that time we have had a couple of very scary episodes – one when he had a seizure whilst eating and nearly choked too, the other when he flung himself on his back and his tongue started to roll backwards and block his throat – but otherwise they are always the same. Unexpected stimuli such as sudden pain or shock may cause him to collapse, his heart and breathing to stop, his eyes to roll up into his head, his complexion to become deathly pale, often blue/ grey around the mouth and under the eyes, and his jaw to clench or his mouth to open wide and body stiffen. Sometimes his legs and arms jerk. After 30 seconds or so, his body relaxes and then his heart and breathing resume.  He sometimes remains unconscious for a further minute but this is unusual and he normally comes round very quickly.

Upon recovery, he is very emotional and extremely tired. His emotions are harder to deal with as he is getting older and realises that something unpleasant has happened. He normally takes a minute to close his eyes and suck his thumb after an episode and he always welcomes a cuddle.
The episodes occur in batches, and are most common when he is tired or unwell. Teething was a real issue when he was younger as any small tap or knock around his head would spark a seizure off. I’m sure you can imagine, a teething baby who is just starting to take their first few wobbly steps and needs to try and be protected from any bumps was extremely difficult.
The seizures are always scary to witness but we have learnt to deal with them in a calm manner. This is partly due to the excellent guidance and reassurance that we have received from the charity STARS (Syncope Trust And Reflex anoxic Seizures). The most frustrating hurdle that we have faced is helping others to understand that this is not the same as breath holding. It is our son’s physical response to unexpected pain, not something that occurs as the result of a toddler tantrum.

In all other respects Fraser is a healthy and lively little boy and we remain hopeful that he will grow out of these seizures one day, which is a possibility. In the interim we manage them as best as we can, and don’t restrict his natural curiosity and desire to explore the world around him.

Take It From Mummy.com would like to thank Jo for sharing her story so that other parents can read what she has been through, and in Jo’s words, “if my story can help just one person or raise awareness of RAS  or the great importance of learning First Aid then it will be worth it”.

You can contact the fantastic organisation STARS (Syncope Trust And Reflex anoxic Seizures) on their website here if you need any support or advice on this condition. You can also find them on facebook: www.facebook.com/blackoutstrust

If this story has prompted you to think about taking part in a First Aid Course we are arranging a parents course with Warwickshire based company Mini First Aid, who run courses specifically for parents and professionals who want to have the piece of mind that First Aid Training can give. If you would like to come to our course please subscribe to our newsletter here

Merlin Annual Passes – Are they worth it?
Living with Post Natal OCD