I promised myself when I set up the review section of this site that I would be truthful and I knew that sometimes that wouldn’t go down well. But at least I thought the parents who follow our blog would trust in our honesty.

With that in mind, when I first received the Spilly Spoon, I won’t lie, I thought to myself, why would I need a larger spoon to stop spillages when I have about 50 syringes in my drawer that do the job just perfectly. 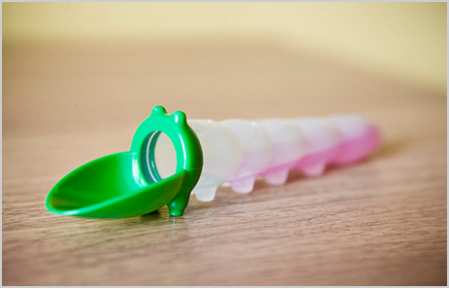 That was until today. I’ve just spent the third night in a row up with my 23 month old who has become unusually clingy and grumpy. Every little thing seems to set him off. Yesterday I hung his coat on his peg at nursery. Apparently he wanted to do it himself, cue huge tantrum at 8am! Lovely. After that, at home time I tried to open the car door for him, another huge mistake! My usually placid and happy little man is asserting his independence and HAS to do EVERYTHING himself. Sigh.

After the third night of 3 hours sleep, today I decided to get him checked out at the doctors. Our GP took one look in his ear and prescribed amoxicillin for an ear infection. I obviously don’t want my little one to be poorly, but I don’t mind telling you that I am a little relieved that there is an explanation for the clinginess and general fractious behavior, rather than just the inevitable onset of ‘The Terrible Twos”

We got home with the children’s favorite ‘Banana Medicine’ the end is in sight! That is until, it comes to administering said medicine. I poured out the banana medicine onto the spoon, but our little man has other ideas. He wants to do it himself, fabulous. Straight down the top it goes. So I grab the nurofen syringe, again, I’m not allowed to help, but its too tricky for him to hold and push it in at the same time, time for the intervention again which doesn’t go down well. And then it suddenly came to me! ..

A few weeks ago I was sent a Spilly Spoon to try out but it’s been tucked away in a box as I’ve had no need to use it. I quickly grabbed it out the box, gave it a wash in the sink. I literally had just a minute to check out how to use it, but its fairly self explainitory, just pour into the tube the correct dosage up to the marker and hand it to tantrumming toddler. So that I did, and I take it all back. Today, this Spilly Spoon has saved my sanity! That and toddler independence has been restored! 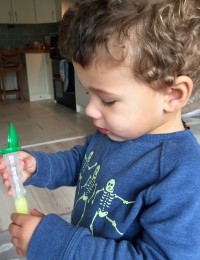 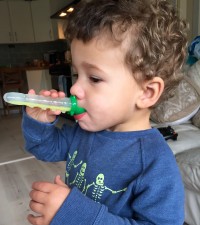 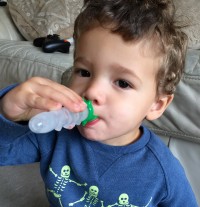 Here’s the info about the Spilly Spoon:

And here’s what Take it From Mummy Like about it:

So there we are, a little surprised , but we love it! So A big THANK YOU to Spilly Spoon for saving the day and to the wonderful Mummy behind it who has created a great invention!

Take It From Mummy has been scrolling for the best deal on Spilly Spoon’s and the best deal is below, from Amazon at £4.50, bargain!