Music To Our Ears – Play On!

When I became a Mum for the first time, my world turned upside down. Suddenly I was responsible for a tiny life, and frankly I was terrified! As the dust began to settle (and I began to recognise one end of a baby from the other) I started to look around for some activities that my daughter and I could go along to in order to have some fun!

Being a musician and a performer (previous life) a music class felt like the obvious choice. But with the plethora of activities available, I needed to find out first if a music class would be a good way for my daughter to benefit from social time within a stimulating environment.

Did you know that the ear is the first sensory organ to develop, and that at just 11 weeks a foetus can respond to music. Babies who had heard different types of music from the womb were more easily settled as newborns, and less upset by changes in environment. Another study had shown that premature babies who were sung lullabies reached normal weight quicker, were allowed out of hospital sooner, and were less stressed.

Fascinating, I thought, but my baby wasn’t born early and had in any case heard masses of music from the womb (she kicked particularly hard during Mahler’s First Symphony at The Barbican Centre!). What could I do for her now?  Well, I learned that in babies and infants, greater exposure to music increases cell changes in the area of the brain concerned with speech. And since music uses both sides of the brain, it boosts other areas too, such as movement, creativity, spatial reasoning, memory and emotional intelligence.

As a new parent I was proud of my little daughter, and could see by her face and body language that she enjoyed music. But there was more to it than that. All babies have an innate awareness of sound. Baby animals rely on this for safety (recognising distress or danger signals, for instance) and little humans can instinctively discern different sounds in a way that many adults have left behind. Music is simply a more sophisticated form of all these natural sounds, and with nurturing this ability will develop rather than diminish as time goes by.

In the face of all this, I was completely convinced of the value of music for my baby.  But I had one tiny reservation. I had always resolved not to be a pushy Mum, and my biggest wish was for my daughter to remain healthy and happy. No problem there – active music making benefits the immune system and raises melatonin, a brain chemical which helps improve mood and stave off depression.

Armed with all this information, and looking forward to sharing a special time with my baby, I joined Monkey Music to ensure a suitable class – and now, ten years later, my daughter adores playing the violin. Watching her play I felt that familiar mixture of joy and pride when I saw her face light up as she played……… 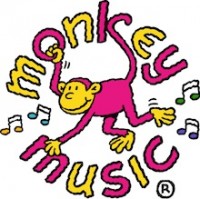